It all started when my colleague told me about a startup event happening in Goa. It was supposed to happen over 5 days. That was a lot of time commitment. We found out that it was not a paid event so we thought it will be a serious event. Later we realized it was far from it – in a good way!

We applied – got selected and were called over for a 5-day event – about 100 startups were selected out of 700 applications. Seaside startup summit was positioned as a business camp where we could meet startups/investors/mentors from all over the world. There one could share the idea of the startups, compete, win, have fun, discuss life, and business in a serious as well as fun way. This summit gave an opportunity to startups and investors who work along and share their ideas. OddyUniwraps participated in this summit and won a prize of $1500.

Oddy Uniwraps won 1st place in Retail Battle with their innovative idea of biodegradable wrapping paper.  Every 3rd home in India uses aluminum foil to wrap food, cook, bake & roast. Aluminum wrapped food does more harm than we know. A product which was oven safe, safe for health, easy to use, eco-friendly was not available in the market. We came up with UNIWRAPS – food wrapping paper which is FOOD SAFETY certified, Environment-Friendly, Grease-proof,100% organic cellulose, non-stick, oven safe. 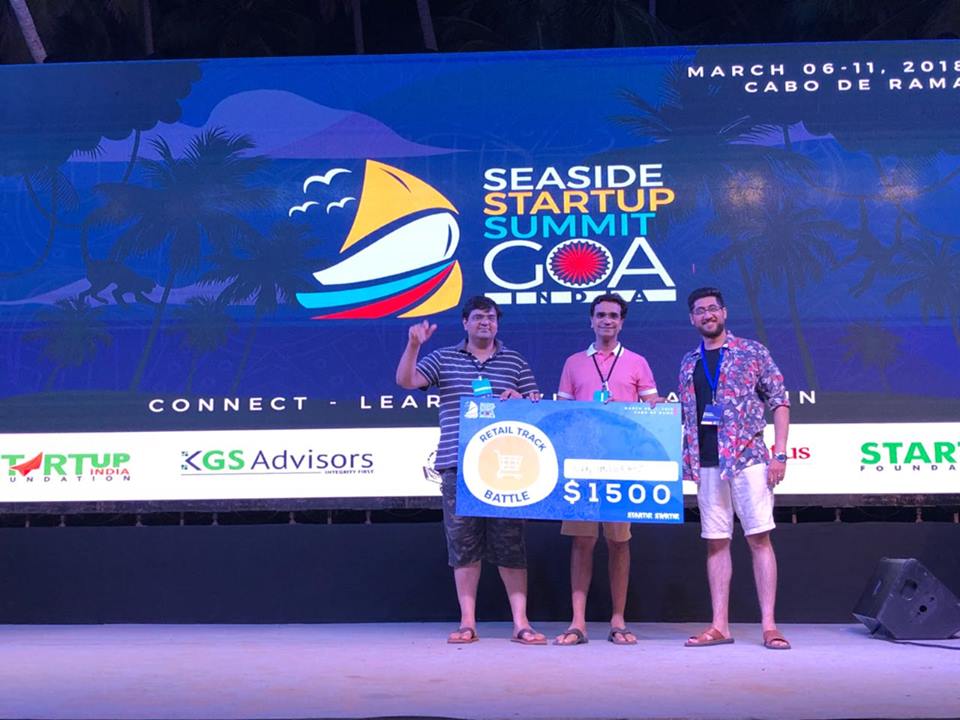 Startup Armenia Foundation organized the first summit in 2016 at the shore of Lake Sevan and it was held from 22-29 of July. The second seaside summit was held in Ras Al Khaimah UAE from 8-12 in February 2018. As the summit moved to India, it was held in Cabo De Rama Beach in Goa from March 6-11, 2018

Seaside startup summit 2018 was a five-day business and fun-filled event. At the summit you connect with people, you learn a lot of new things, you win, and you have fun, an ideal way to combine business and leisure.

More than 300 members got together to commend the greatest and the most anticipated Startup occasion in Goa. Seaside Startup Summit India, Goa assembled effective new businesses, speculators, guides, and speakers with the end goal for them to trade learning, share a method of life, investigate new conceivable outcomes of participation, and defeat an assortment of difficulties.

The first day began with members landing in the region of the Summit. They had a chance to settle down in tents, get comfortable with the idea of the Summit, meet their group pioneers and staff individuals.

The day started with a wakeup call at 7 am and everybody had to rush towards the stage by 7:30 am sharp to get updated on the day’s agenda. But wait – there was a yoga session as well. The entire crowd was divided into various squads. Squad members were responsible for each other and we did carry a lot of bonding back with these squad members. After the yoga session, we had breakfast as a squad together and then everybody was hurrying to the amphitheater to go to the workshops about various items important for a startup. The workshops were taken up by industry specialists like Sameer Sortur, Abhay Tandon, Greg Acuna and Mohan Bethur.

At the point when every one of the workshops of the day were done, the arrangement of open bonfire, the talks began, where every one of the members were mindfully tuning in to the disappointment and examples of overcoming adversity of the business people while sharing considerations, looking for answers to their inquiries and finding the key elements of achievement. The arrangement included discusses artificial insight, Block chains, and Protection of IP addresses, the patterns of the Indian market and about Going Global. The day, as usual, finished with great music and positive vibes.

International Women’s Day Celebration and Award Ceremony were directed by Tripti Singhal, Mrs. Mridula Sinha, Governor of Goa and Annalie Killian. The occasion was to plan to rouse, propel and brighten up the ladies business visionaries.

In the meantime, a discussion was going on for choosing the right team. The speakers were Anil Chhikara, Vivek Kumar, and Abhay Tandon. After there was the arrangement of open bonfire discusses Blockchains, Role of Coaches and Mentors, the Success Stories of Startups, Going Global, utilizing systems administration to get business and financial specialists, Talent Management.

After every one of the workshops, the members got together to talked about the coming day’s timetable since the Big Battles and Seed Battles are anticipating. The day finished with some celebrating, great music and a wonderful supper.

While the main part of the day was spent on pitching, winning and buckling down, the other was tied in with learning and having a great time. The night began with the open bonfire discusses building individual brands, the speakers’ close to the home involvement of building worldwide media brands from India, constructing India’s quickest developing cleanliness brand et cetera. Everybody was marveled by the pit fire talks, the stories of the speakers and the associations that they made. At the point when the day arrived at its end, the conventional meetup was directed, when the best new companies were chosen for the Brand Battles.

The final day of Seaside Startup Summit has drawn nearer and the startupers were sitting tight for the names of the champs to be declared. It appeared as though this was a standout amongst the most energizing days in their lives not just in light of the fact that the names of the victors would have been uncovered, yet additionally on the grounds that a standout amongst the most groundbreaking encounters was arriving at its end. The day was loaded with feelings and emotions.

In the wake of declaring the names of the victors, the preliminary works for the Closing Ceremony began. H.E. Mr. Armen Martirosyan, the Ambassador Extraordinary and Plenipotentiary of the Republic of Armenia in the Republic of India, It Secretary of Goa Public Service Commission (GPSC) Ameya Abhyankar landed in the region of the Summit and began having discussions with the members.

The Closing Ceremony, as the entire occasion itself, was held in a friendly manner. Everybody had an opportunity to talk up about their feelings and offer stories from their experience amid the Summit. The coordinators of the occasion additionally gave last talks amid the Ceremony. Mr. Hakob Hakobyan, the originator of Seaside Startup Summit and Startup Armenia Foundation wore an Indian national suit as an indication of regard. Volunteers group likewise arranged an exceptional astonishment in a frame an Indian move.

The occasion finished with successful minutes brimming with joy and euphoria.